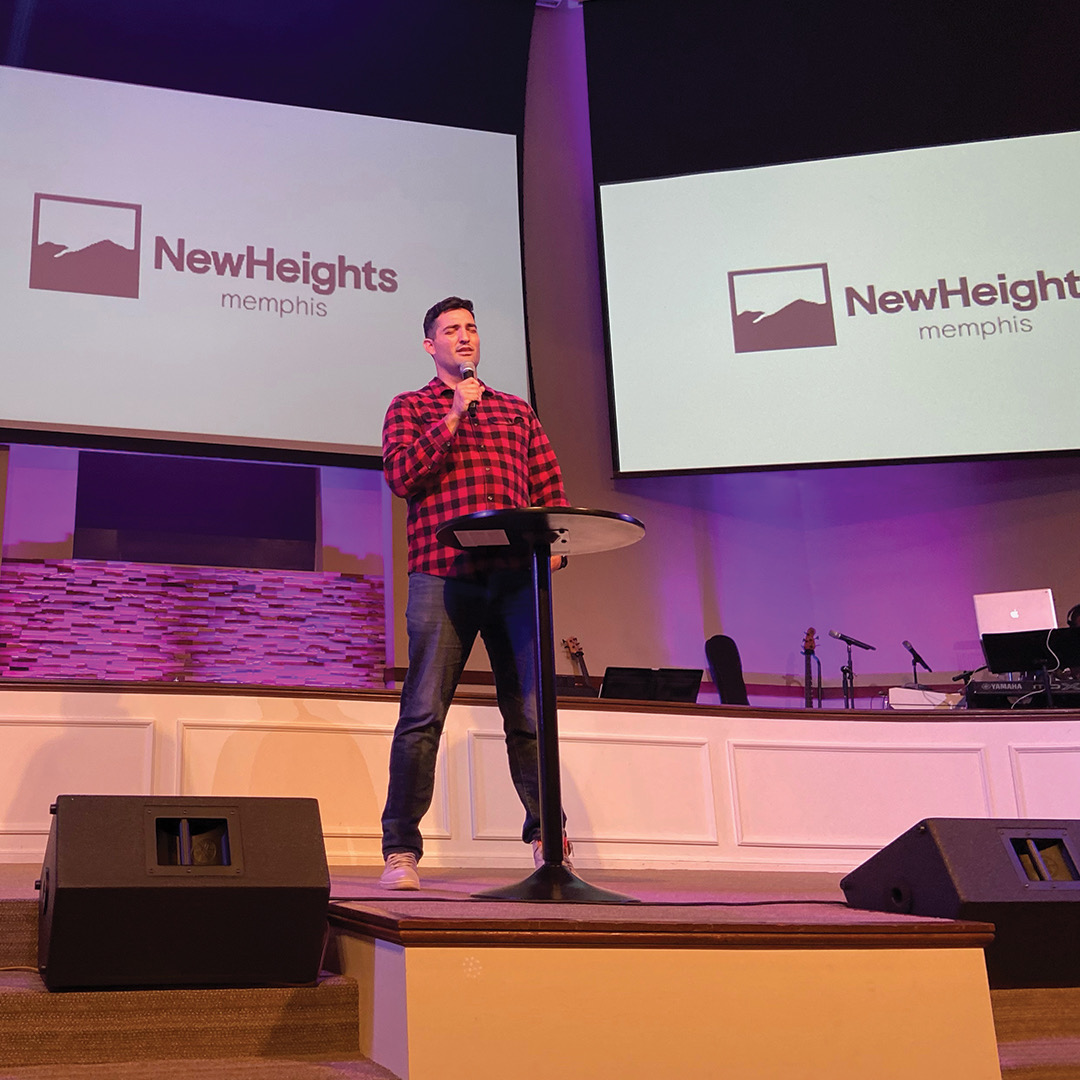 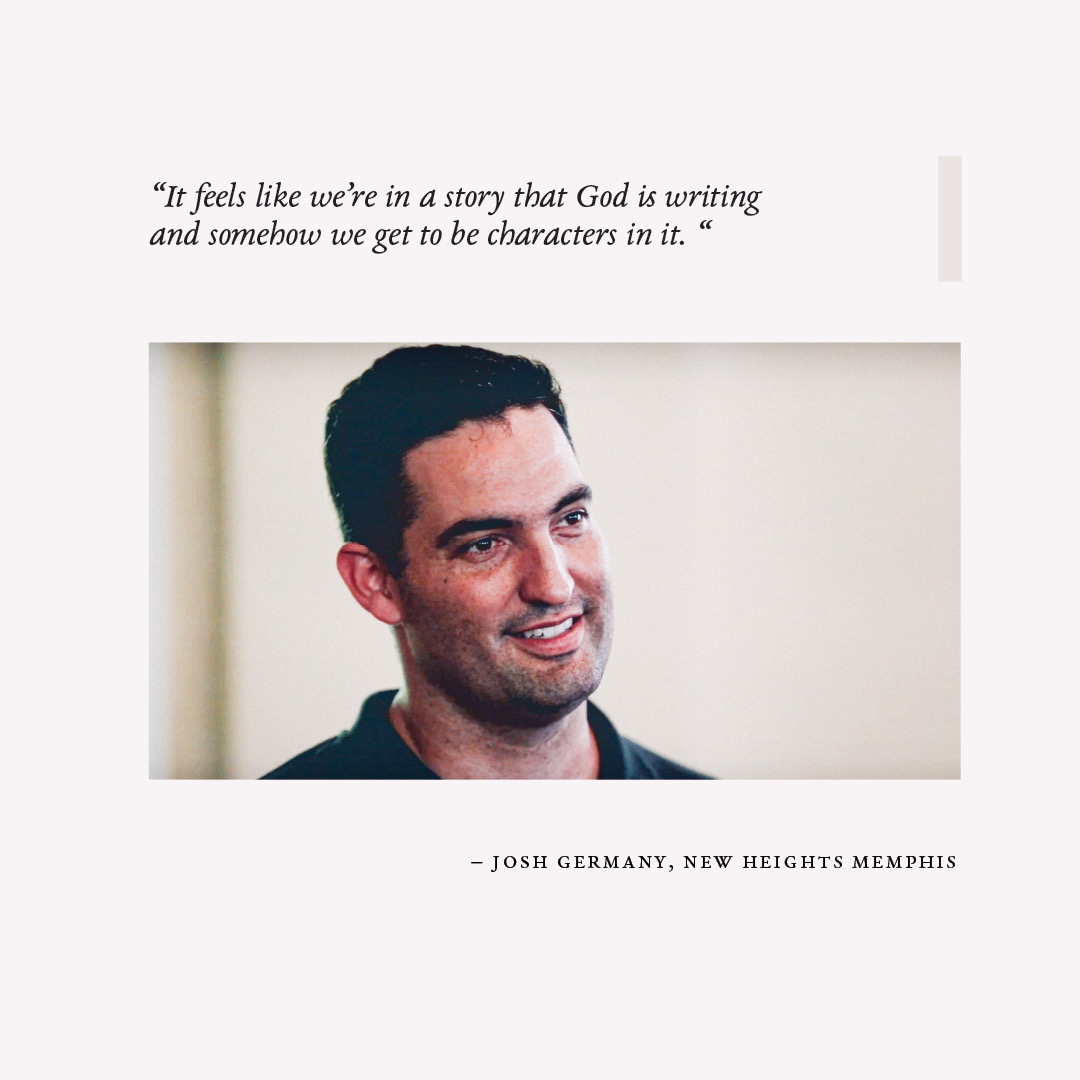 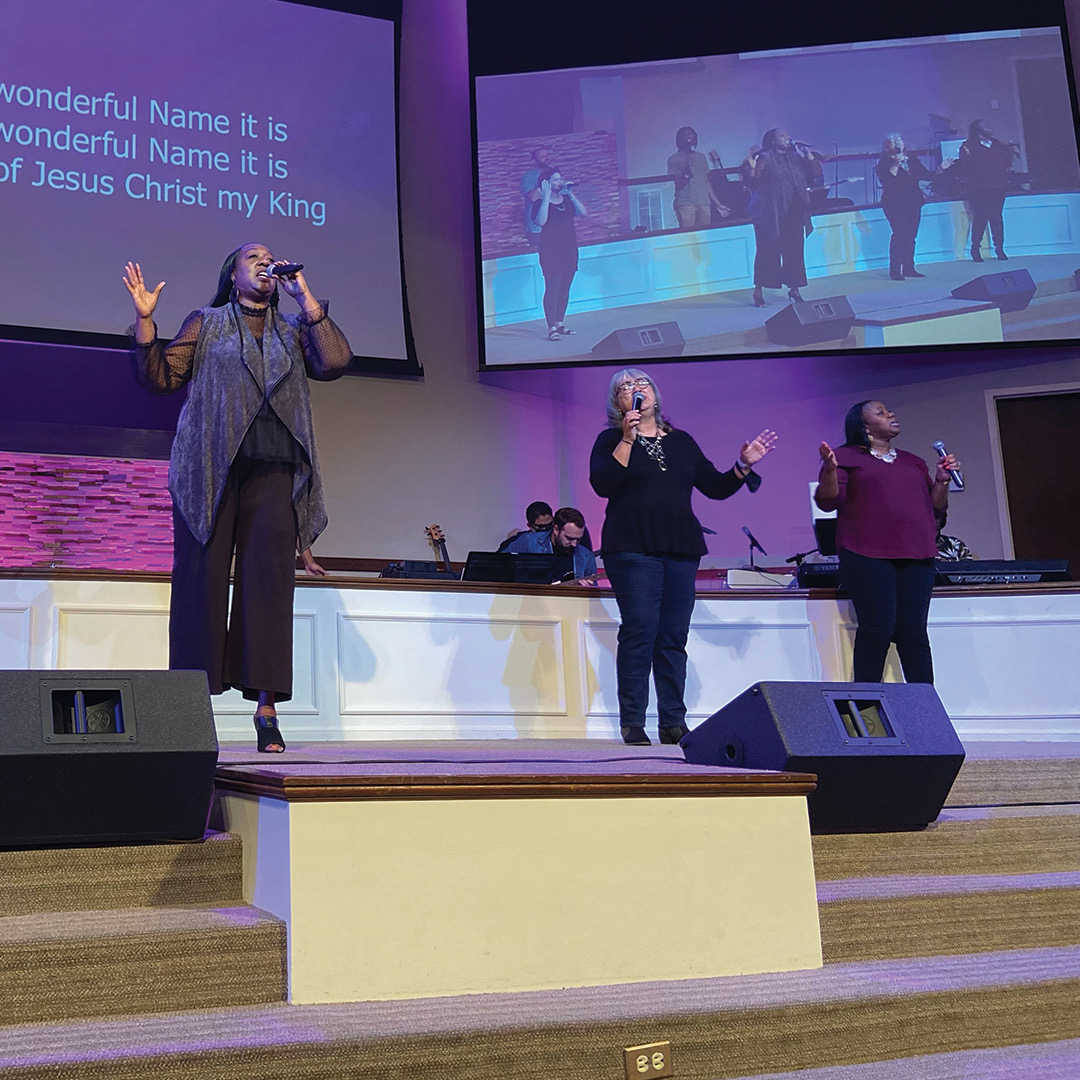 “The story of New Heights Memphis is a really beautiful one. Memphis has always been home for my wife and I, but it really begins with my relationship with Josh Foliart. I knew him from college when I was a walk on for the Razorback baseball team my freshman year. I made it on the team and we became friends through that.  Josh was always someone I admired, but we had fallen out of touch over the years.

My wife and I spent some time living in North Africa and when we came home to Memphis, Josh was still on our mailing list.  We had stayed connected through that. At that time, we were mourning the loss of North Africa and our vision of church planting there and seeing the gospel take root. It was really a season of mourning and waiting on the Lord for us. In the wake of that, I felt the Holy Spirit nudging me. I felt like we were getting to be a part of good things, but I wanted more.  Coming home, what would have been natural, would have been to find connections and find an easy ministry step for us to walk into, but the Lord just held those doors shut.

All of this led to a Holy Spirit moment in church in June of 2019. I was asking God, “What are you calling us to do?”  In that moment, I felt like he said, “If you are fearless, what would you do?”

“Well, that’s easy,” I thought, “I’d plant a church. But does Memphis need one more church? Is that just me?”

I felt a nudge and a question, “Is the Bride on her full display in Memphis? Is she doing all that she is called to do and walking in the way she is called to walk?” I knew she wasn’t.  There is a lot of racial division and a tribalistic mentality where the Church isn’t really unified.

As my wife and I began to process this, we  knew we couldn’t do it on our own, and we didn’t want to. We began to ask God to bring us partners. We knew that if it was from him, he would supply it.

We started praying and sent out an email updating people generically on this vision. Josh Foliart reached out to me right after that. He said he felt like the Holy Spirit was moving in the vision we sent out and asked if I would come to Fayetteville. He said God was doing a lot of cool things there, and he wanted to tell me about them.

So, I went to Fayetteville to sit down with Josh, and he told me what New Heights was about. He told me that he had been brought on to direct the New Heights Association, and he was looking for good soil to invest in. He said, “Look, we want people with a city vision.” So, I said, “Let me tell you about Memphis.” I shared with him all that the Lord had spoken to me. He was excited,  and we both felt good about the connection.

When the meeting was over, I happened to bump into Jim Hall in the GO Center.  We shared a little bit about our meeting and he said, “Look, no offense; you seem like a fine young man. But I know Memphis, and you’re a white kid from the suburbs.  I don’t want to plant another white church in Memphis.”

I assured him that I didn’t want to do that either. The racial homogeneity of the church in Memphis had distressed me for years. I had been praying about how God might bring together a movement that might transcend race and bless the nations. So, I said, “I’m with you on that. I think that just means I’m not the whole answer.”

Later, Jim told Josh Foliart that if God somehow supernaturally provided a black pastor to mentor me, then we’d think about it. But he wasn’t really interested in Memphis until that happened.

A couple of weeks later, I was at a prayer meeting that I go to every Tuesday morning. I scooted to a booth and prayed, “Okay Lord, I don't want to make this thing happen. If you have somebody you want me to connect with, you’ve got to put them in the booth next to me.” I kind of intentionally sat tucked against the wall. Literally, about 15 minutes later, this older black pastor walks up and crawls over about 4 people to sit next to me. We started talking and I learned his name is Chester Berryhill. After the meeting, he asked me, “What’s your vision? Tell me about yourself.”

After I shared with him all God had been leading me in, he looked at me and said, “Man, I didn’t know why God told me to sit next to you this morning, but now I know it’s because you’re a crazy white boy.” He then just started encouraging me and prophesying over me. I was blown away. We met later that day and talked some more, and he’s been a brother and a mentor to me ever since.

It’s just so beautiful how God brought us together and the history of Memphis that comes with that relationship. He’s a pastor of a church that has been around since 1865, and was originally built for slaves. He met Dr. King when he came to Memphis and was one of the men that Dr. King spoke with sometimes when he came through the city.

He is now serving on our board of advisors. We knew that if we wanted to plant a multi-eithnic church, we needed black leadership from the very foundation of this church.  We need black voices to be speaking into the vision and speaking into the direction of how we do things. The Lord provided for us abundantly.

A few weeks later, at that same prayer meeting, pastor Ricky Floyd from Pursuit of God church in Fraser walked up to me and said, “Hey, I need to meet you.” I shared about what we are doing and he said, “I want to walk with you and be a big brother to you and help you not make the same mistakes that I made.” It has been a huge blessing that another black pastor is willing to walk with us in this.  He has a huge kingdom vision for the city which has been such a blessing.

We launched our first service on September 27th and it has been beautiful. It’s not perfect, and there are going to be bumps. It blew us away, though, to see this vision that God gave us a year and a half ago come about so quickly.  Everything has been driven by prayer and by these supernatural partnerships that God has brought to the table.  It feels like we're in a story that God is writing and somehow we get to be characters in it.” 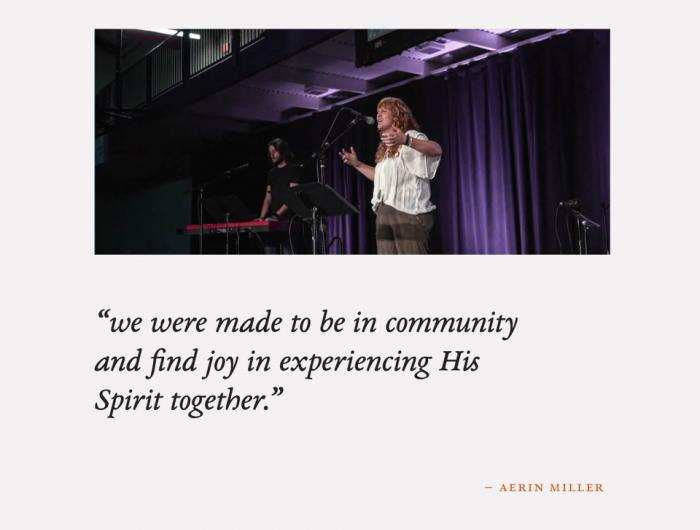 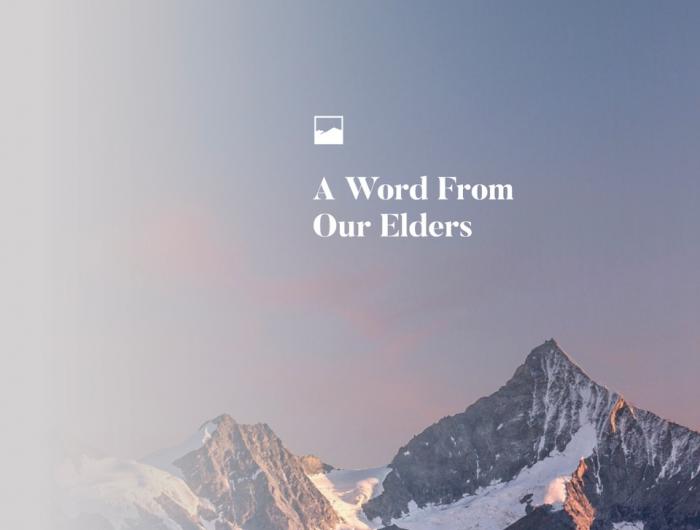 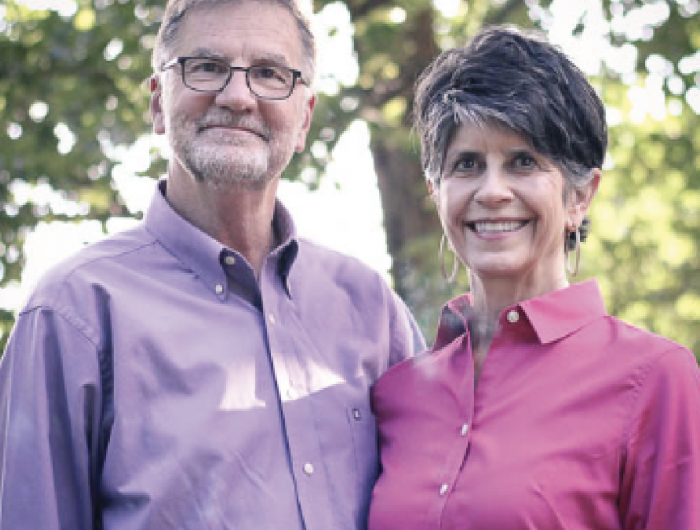 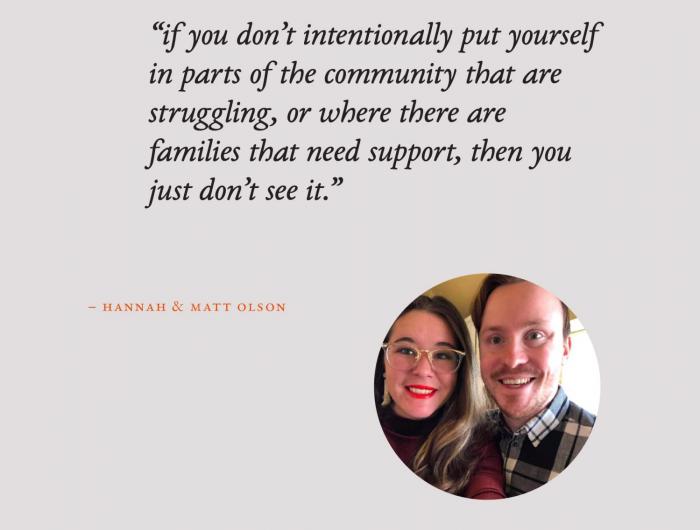 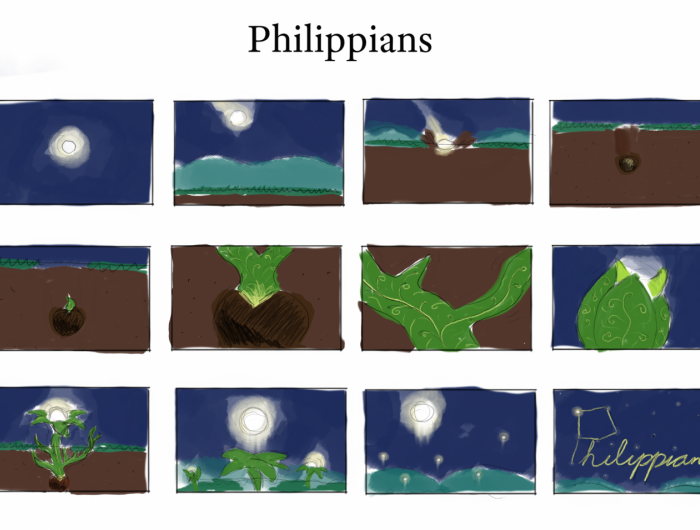 Behind the Video: Philippians 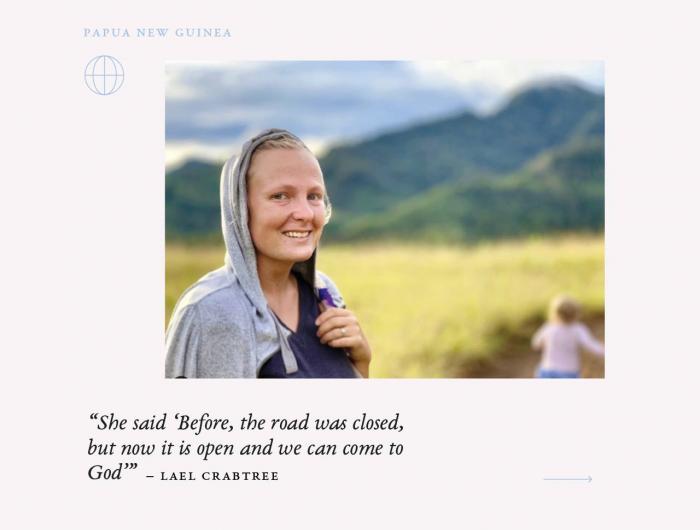